The Sweaty Eyeballs Animation Invitational was a grand success this year! Thanks to everyone who showed up for the screening and thanks to our sponsors the Maryland Film Festival, MICA, and the College of Fine Arts and Communication at Towson University.

The Audience Choice Award votes have been tallied and it's a TIE!!! The audience picked:
Futon - Yoriko Mizushiri (Japan)
and
But Milk Is Important - Anna Mantzaris & Eirik Grønmo Bjørnsen (Norway)

Be on the lookout for the next iteration of Sweaty Eyeballs in 2014! 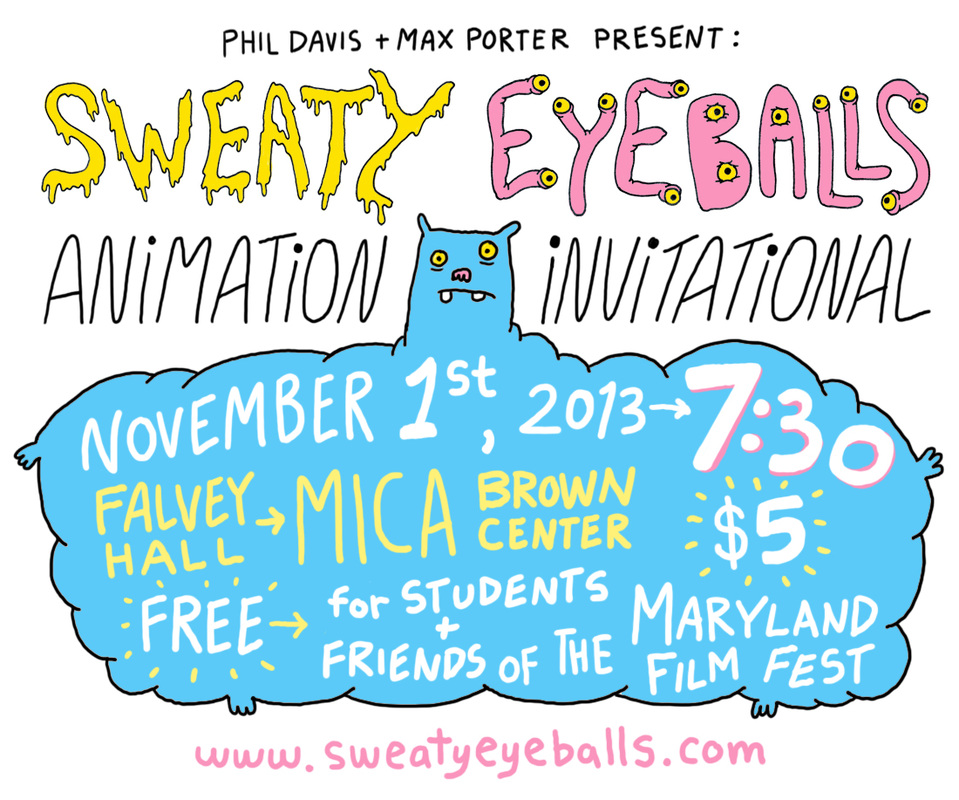 Sweaty Eyeballs Animation Invitational is a screening of independent, international short animated films ranging from narrative to experimental to music video and documentary. 2013 is the 2nd year for the screening in Baltimore, Maryland curated by Phil Davis and Max Porter. The 2013 edition of Sweaty Eyeballs is a collaboration with our sponsors the Maryland Film Festival, Maryland Institute College of Art, and the College of Fine Arts and Communication at Towson University . Come on out for a weird night of eccentric animation and get a chance to vote for the audience choice award. Check out the lineup of animators for 2013.

Jérémy Clapin (France)
Jérémy Clapin got his degree in Paris ENSAD in 1999. He's worked since then in various fields : art direction, illustrator for editors and magazines, animator and independent director for commercials. In 2004, he directed his first animation short film, A Backbone Tale, which won fifteen international awards. In 2008, Skhizein, his second film, wass nominated for the french CÉSARS, short-listed for the OSCARS and won more than 90 awards in festivals. Since then, he has directed many commercials (SNCF, CITROEN), as well as the Good vibrations short film for ACME filmworks. In 2010, he joined PAPY3D Productions and directed Palmipedarium, his new film financed by Arte et and entirely made using Open Source software (Blender). 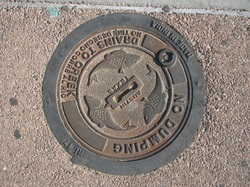 Eric Dyer (USA)
Eric Dyer is an artist, filmmaker, and educator whose work primarily involves spinning stuff. Dyer has exhibited in over 30 countries, at such venues as the Smithsonian National Gallery of Art, Musee Chateau d'Annecy, Ars Electronica, and the Cairo and Venice Biennales. He has been honored as a Fulbright Fellow, Sundance Film Festival New Frontier Artist, Guggenheim Fellow, and is currently a Creative Capital grantee. Dyer teaches animation at UMBC.

Jake Fried (USA)
Jake Fried (b.1984) lives and works in Boston. Originally known for his paintings, Fried has spent recent years working on a series of hand-drawn, experimental animations or "moving paintings". He has been an Educator at The Museum of Fine Arts, Boston since 2007.

Olivia Huynh (USA)
Olivia Huynh is an animator/illustrator from Houston, Texas. She recently graduated from the Maryland Institute College of Art in May 2013 with a BFA in animation. Her focus is on background environments and children's narratives.

Kirsten Lepore (USA)
Kirsten Lepore is a director and animator based in LA, with an MFA from CalArts.  Her 2010 stop-motion short, “Bottle,” just received the first ever Student Annie Award, as well as taking top prizes at Slamdance, the Stuttgart Animation festival, Bill Plympton’s Annecy+ program, BAFTA LA Student Film Awards, Florida Film Fest, Arizona Film Fest, the Vimeo Awards, and several others.  Her 2008 animated film "Sweet Dreams" won the Special Jury Award at SXSW in 2009 and LACMA's Young Director award in 2010.  She was also recently featured as a rising talent in Shots Magazine, Animation Magazine, Focus Features, and named one of the 50 most creative people of 2011 by Creativity Magazine. With a client list including MTV, Yo Gabba Gabba, Newsweek, Whole Foods, Toyota, Facebook, Nickelodeon, Nestle, and Glamour Magazine, her work has been featured on TV, the web, and at various international film festivals.  Besides her passion for animation, Kirsten is also obsessed with kimchi, kombucha, and other culinary wonders.

Anna Mantzaris & Eirik Grønmo Bjørnsen  (Norway)
Anna Mantzaris was born 1986 in Stockholm, Sweden. She studied two years at Art School before packing her bag and moving to Norway, where she took a bachelor in Animation. After graduating Anna moved back to Stockholm and has since then worked on various animation projects, both commercial, short film and children's tv-series. Anna has a big heart for Stop Motion, things with a handmade feel and telling stories!

Eirik Grønmo Bjørnsen was born 1987 in Sandnes, Norway. He went to Art School for two years before he moved up north to Volda were he studied animation. After finishing his bachelor degree he has been working with several animation projects within the commercial business. Eirik has been into making stories since he started out as a kid doing Lego animation with the family's video camera. From there he's had a big interest for Stop Motion. 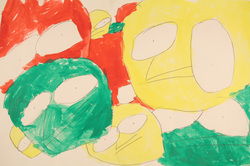 Peter Millard (United Kingdom)
Peter Millard is an animation filmmaker who is based in London and is a recent graduate from the Royal College of Art. He has drawn several surreal, chaotic and colourful animations, and has had films screened all around the world at various festivals and galleries.

Darcy Pendergast & Seamus Spilsbury (Australia)
Director Darcy Prendergast (b. circa 1985) has always had imagination. After starting his artistic career on the living room walls, his parents supplied his chubby, yet surprisingly dextrous fingers with a wide gamut of art supplies, as well as a steady stream of paper. At the age of 4 he wanted to be a zookeeper and play with Tigers like his dad. At age 5 he wanted to be Indiana Jones, who was a cooler version of Dad. At 6 he wanted to be a paleontologist like Sam Neil in Jurassic Park – who was cooler than Indy because he outsmarted a T-Rex with a flare. Then at the ripe ol’ age of 7, he decided that his constantly shifting career paths were undoubtedly due to a poor understanding of the skillsets that he was endowed with. He opted to allow himself some time for his interests to percolate, manifest and remain… before placing all his eggs in the one basket. With a keen sense for the absurd and a taste for the tactile, he moved into the alluring world of film making at age 17, where he still lives to this day… Darcy would still like to outsmart a T-rex with a flare.
Seamus Spilsbury's creative flair was evident form a young age. Whether it was using pens, paints or pencils. His true talent was using his hands to create, which started when he began crafting miniature furniture for his sisters doll house. At the age of 14 Seamus had is first taste of stop motion. He and his cousin recreated the star wars trilogy with their collection of figurines. Seamus has pursued his passion for animation and has made a career for himself in the creative industry. 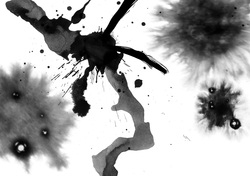 Thomas Stellmach & Maja Oschmann (Germany)Thomas Stellmach is animation director, producer, author and animator. Amongst international awards for his independent productions, he received the Academy Award in 1997 for the stop-motion film QUEST. He studied animation at the Kassel Academy of Arts. After that he founded the animation studio “Lichthof – Film & Animation” in Kassel and produced for TV and advertising. In 2009 Stellmach left the company to focus his work on artistic animation projects. VIRTUOS VIRTUELL (2013) is his first independent film after the study.

Maja Oschmann is an artist and drawer. She studied at the Kassel Academy of Arts, was awarded the Otto-Braun scholarship, and sold her works at the Artothek Art Collection Kassel. She has focused her analysis on the relationship between drawing and music. This is reflected in her multidisciplinary projects: at the opening event of the Kassel Music Festival, and with the contemporary composers D. Jascalevich and P. Swinnen. She founded a private school of drawing and gives lessons at the Academy. Maja Oschmann co-directed VIRTUOS VIRTUELL with Thomas Stellmach from April 2010 to February 2013. This is her first film.

Stephanie Swart (USA)
Stephanie Swart is animator living in Brooklyn, New York. She studied animation at Rhode Island School of Design and cognitive science at Brown University. She is interested in analogies between the perceptual process and creative construction in animation. Strange Wonderful is her senior project at RISD. 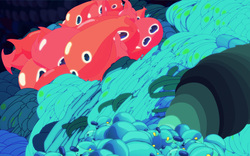 Ori Toor (Israel)
Ori Toor is an animator and illustrator from Tel-Aviv. He specializes in improvising frame-by-frame loops and using them to build bigger loops which he then uses to make even bigger loops (and so on)... 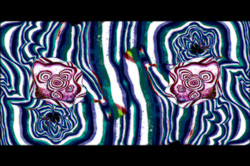 Caleb Wood (USA)
Born in the year of the dragon, Caleb Wood is an independent animator living in northern Minnesota, USA. He is most interested in the dynamism of the mundane and overlooked, abstract, and all things moving. Animation is his favorite thing.